Balloon Club is a Portland ambient lo-fi project that recently released their record ‘Some Things You’ve Got To Let Go’, which you can find on Bandcamp here. I was lucky enough to get to watch Balloon Club perform live at the Honeyhive last week, and take some photographs of the show. 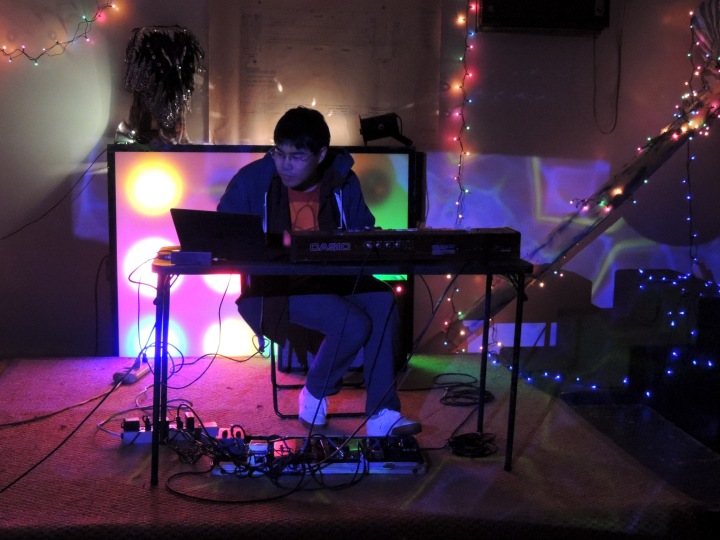 Balloon Club opened up the performance last Tuesday night with a brief, somewhat shy introduction, thanking the crowd for coming out and telling us a bit about the project, before launching into the set. Although the first impression was that of a reserved musician about to timidly play some music, Balloon Club quickly proved that they were meant for an audience. Artistically threading different pieces of music, sound, and dynamics together, they wove a half hour’s worth of meaningful and exciting songs, one after another. They were able to seamlessly blend one sound into the next, controlling to the fusion and fission of the music with precision and ease, and leaving the crowd hungry for more.

Just by looking at the set up, you may not expect a grand stage presence from a show like this, as the table and chair suggests there won’t be a ton of movement. Despite the limitations of the setup, however, Balloon Club exuded passion and a love for creativity that was obvious to even the most casual viewer, and their presence onstage was just as engaging as any full-band’s could be. Between all the different buttons and switches being operated, Balloon Club was reaching over, down, and across the sound equipment to make sure every tone and beat came out at the exact right time, volume, and intensity. They navigated their songs with an uncommon confidence and expertise, keeping the listeners on their toes, wondering where they would be taken next.

Ambient lo-fi is not my preferred genre, but after this show, I might have to check some more of it out. I’ll definitely be returning to another Balloon Club show, and I’m excited to see what they continue to do in the future. If you haven’t had the chance to check out their music, again, you can find them on Bandcamp here and keep an eye out for any upcoming shows. Balloon Club is definitely a musician you’ll want to keep up with!